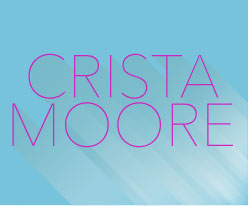 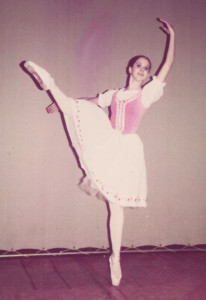 Crista at 16, with the American Ballet Theatre.

Crista began her career as a ballet dancer, receiving awards and scholarship offers from major New York City ballet schools. At the age of 14, she was offered a full scholarship to the American Ballet Theatre School and moved to NYC, living on her own while studying at the ballet school and attending high school. Opportunities to observe countless performances and perform as a supernumerary in the company’s classical ballets followed. At the age of 17, she reconnected with a childhood love of acting, singing and exploring other forms of dance, and began her “second career.”

Crista made an extraordinary Broadway debut starring in the title role of Gypsy to great acclaim, working with the show’s iconic creators, Arthur Laurents, Jule Styne and Stephen Sondheim. She is acknowledged to be the first actress to have taken the role “from self – abnegating duckling to dazzling swan with seamless perfection, making her the first actress to justify the show’s title being not ‘Rose,’ but ‘Gypsy.'” Her performance  garnered a Theatre World Award for Best Broadway Debut, a Tony nomination, and Drama Desk and Outer Critics Circle Award nominations. She was described by Arthur Laurents as “…a dazzling Gypsy Rose Lee.”…”The whole show depends on Crista’s Act Two transition from a very young girl to a woman. And she’s the first person who’s ever brought it off completely.” 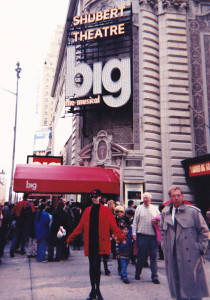 In her next Broadway show, “Big, the musical”, Crista created the role of Susan Lawrence, and received Tony, Drama Desk, and Outer Critics Circle Award nominations for Best Actress. New York Magazine’s review by John Simon: “One of the most gifted, appealing, and irresistible young actresses in our musical theatre…a dazzler…there can never be enough of Miss Moore.” She worked again with Ockrent and Stroman when starring as Polly in the First National Tour of “Crazy For You.”

Known for her unique versatility and an unexpected flair for comedy, she has also been tapped for Broadway plays such as Noel Coward’s “Waiting In The Wings”, playing Zelda opposite Lauren Bacall and Rosemary Harris at the Walter Kerr and Eugene O’Neill Theatres, as well as Manhattan Theatre Club’s “Absurd Person Singular” at the Biltmore Theatre, and Tom Stoppard’s “Jumpers” at the Brooks Atkinson, directed by David Leveaux. 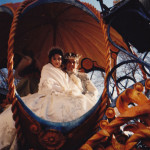 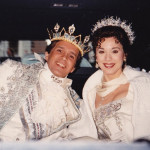 with prince George Dvorsky, after Macy’s event. Warm and off to Thanksgiving dinner!

Ms Moore starred for 3 seasons in musicals with the New York City Opera at Lincoln Center’s State Theatre; she was Cinderella, in the New York stage premiere of Rodgers and Hammerstein’s “Cinderella”, which led to a featured television appearance singing a duet from the show at Herald Square on NBC’s Macy’s Thanksgiving Day Parade, and she was asked to reprise the role for Cleveland Opera’s production at the Palace Theatre the following year. She next appeared at New York City Opera as Eileen in “Wonderful Town” working with creators Betty Comden and Adolf Green; and as Snookie in “110 In The Shade”, directed by Scott Ellis and choreographed by Susan Stroman. 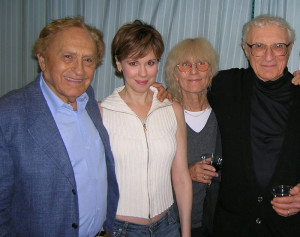 Off Broadway, Crista created the role of Julia in “Birds Of Paradise” at the Promenade Theatre, written by Winnie Holtzman and David Evans, starred as Bella in the revival of “Rags” at The American Jewish Theatre, created the role of Laura in David Ives play “Long Ago and Far Away” at Ensemble Studio Theatre, played The Widow in “Zorba” at The York Theatre’s Musicals In Mufti, created the role of Leigh Hunt-Smith In “Stars In Your Eyes” at the Cherry Lane Theatre, and played Elmire in Moliere’s “Tartuffe” at the Worth St Theatre.

With President and First Lady George and Barbara Bush backstage at The Sound of Music.

Ms Moore has appeared in plays and musicals on regional theatre stages across the country, in such roles as;  Nurse Kelly in the play “Harvey” at Cincinnati Playhouse, Janet in “The Rocky Horror Show” at Actors Theatre Of Louisville, Wendy in Pennsylvania Center Stage’s “Peter Pan” (when she got to fly!) , as Jammes the mostly silent ballerina dancing “en pointe” in Ken Hill’s “The Phantom Of The Opera” at Rep St Louis and Theatre In The Square San Francisco, as Eliza in “My Fair Lady” in multiple productions, as Maria in “The Sound Of Music” at Sacramento Music Circus”, & a few years later playing Elsa in the same musical at the Ogunquit Playhouse and for the Marrionette Theatre of Austria’s touring production. She played Sarah in “Guys And Dolls” at the Longwharf,  the Actress in the play “The Guardsman” at Cleveland Play House, originated the role of Lena in the premiere of the play  “Under Midwestern Stars” at Kansas City Rep, played Grace in “Annie” at Paper Mill Playhouse and Atlanta TOTS, and at the Geva Theatre played Martha Jefferson in 1776, Cassie in “A Chorus Line” and spoke entirely in French as Lucille In Ackbourne’s play “House And Garden”.

Featured roles in film include Elizabeth Sinclair in independent film maker Todd Solondze’s “Storytelling”, and television appearances on “Law And Order SVU”, “All My Children”, a recurring role on “Days Of Our Lives”, a weekly feature on Baltimore’s “PM Magazine”, as well as appearances on CNN and Entertainment Tonight.

Concert appearances include: the role of Penelope in “The Golden Apple” at Bard College with The American Symphony Orchestra conducted by Jonathan Tunick, Oscar Hammerstein Award Gala honoring Arthur Laurents, hosted by Stephen Sondheim at the York Theatre, reprising her songs from “Gypsy” and “Big” for “Broadway Originals” at NYC’s Town Hall  directed by Michele Lee, “Unsung Musicals” at the Danny Kaye Playhouse, “Standing Ovations IV” at Joe’s Pub, “Broadway Bears XIV,” and a concert at Bermudas Town Hall. 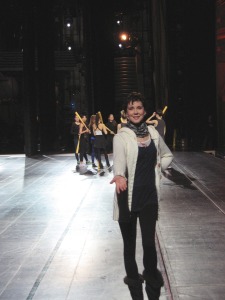 On the great stage of Radio City Music Hall with the Rockettes!

Crista has performed her solo shows “Let Me Entertain You” and “Sentimental Journey” for audiences across the country. 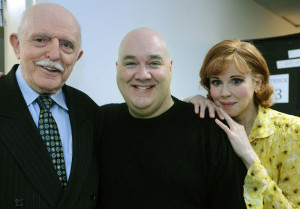 On the great stage of Radio City Music Hall with the Rockettes!Ms. Moore can be heard on the original cast recordings of “Gypsy”, “Big” and “Birds Of Paradise”, and in vocal performances on Varese Sarabande Label’s “Unsung Sondheim”, “Unsung Irving Berlin”, “Unsung Musicals”, “Lost In Boston IV”, “Peter Pan”, “Cinderella”, “Primetime Musicals”, and “Shakespeare On Broadway”.

Recently Ms. Moore originated the role of Alice, and traveled the country, on the First National Tour of The Addams Family. She created the role of Isabella in Radio City Music Hall’s world premiere of the New York Spring Spectacular, starring the Rockettes, directed by Diane Paulus and Warren Carlyle. And this spring she guest starred in Off Broadway’s Nassim at New York City Center.